July 21, Seoul Station Square became a sea of blue. More than 2,000 residents wearing a blue hat and a symbol of peace ribbons, holding a blue banner to protest against the deployment of missile defense systems Terminal High Altitude Area ("Sade" anti-missile system) in Seongju . "Oppose to the deployment of 'Sade'  by using our life “ is writing in the slogans.

Protesters hold slogans of "fight to the death against Sade" "US get out of Korea" and other banners, to express their dissatisfaction, and said they would fight to the last moment, until the government revoke the decision to deploy the Sade.
According to Korean media reports, South Korean President Park Geun-hye defend for the deployment of "Sad" anti-missile defense system in Korea. She said, she recently faced so much  blame and resentment because of "Sade" ,but if a president give up, national security will become a big problem. I will not yield to any condemnation." 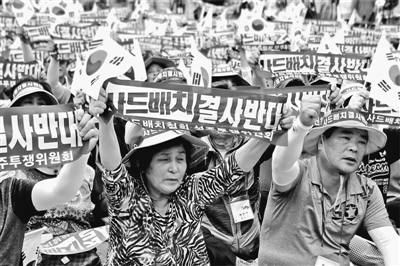 Protest march is the right way to express their views.We should consider the situation of people and police safety problem. You may need our anti-riot barrier .This type of fence is designed to make riot or crowd control, so riot control fence  is also named as access control barricade, anti-riot barrier, but Mojo Barrier has been the most popular name.If you want to have more details of our product or are interested in our anti-riot barrier, please be free to contact us. Contact information:
Tel: +86-311-67263936
Email:sun@sunwiremesh.com