Police in Berlin say 123 officers were injured in clashes with leftist protesters over the redevelopment of a district in the east of the city.  About 3,500 protesters marched through Friedrichshain last Saturday. Some were masked and threw missiles.This protest was the most violent in the past five years,  About 1,800 police were deployed at the protest,  Police fired tear gas as shop windows were shattered and police cars damaged. And during the protest, some neighbours beat spoons against pots in support of the squatters. 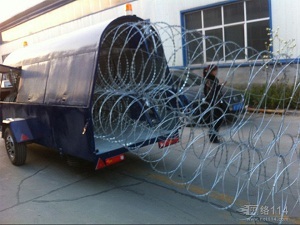 This civil unrest has been stopped, but government of each country must be aware that hidden danger is always there. During this protest ,  many police and denizens injured, normal life was greatly influenced. We can say that the police met violence by violence. Faced with this kind of situation,the police and the government could use a new designed equipment -- Rapid Deployment Barrier to fight with the riot non-aggressively, which  could  mitigate injury and damage to people,police and property.

Zhengyang Rapid Deployment Barrier is in accordance with military standard. When you need it,zhengyang rapid deployment barrier will provide you with security! Any questions, you can email to sun@sunwiremesh.com